Soursop is not only known as a delicious fruit staple in the tropics but also possesses health and medicinal benefits. Indigenous to South America and Africa, Soursop is produced throughout Southeast Asia, the Philippines, Indonesia, and many parts of the Caribbean. It tends to flower and fruit on a continual basis.

The sour sop‘s heart-shaped, spiky exterior is not appealing in the least, but as they say, don‘t judge a book by its cover. This exotic fruit‘s creamy white pulp is sweet and delicious and its health benefits are ample. Soursop contains B vitamins, vitamin C, calcium, iron, healthy fatty acids, carbohydrates, and protein. The fruit is also cholesterol free and low in calories. Approximately one cup per day will provide the maximum amount of health benefits.
While many people prefer to enjoy its sweet taste in a drink or creative dessert recipe, such as cheesecake or ice cream, these sugary treats also have plenty of natural health benefits when eaten on a regular basis. Some people even believe that Soursop may be an effective treatment for cancer; however, there is no scientific evidence to back up those claims as of yet. A study published in the Journal of Natural Products following a recent study conducted at the Catholic University of South Korea stated that a certain chemical found in Soursop can selectively kill colon cancer cells at almost ten thousand times the potency of Adriamycin. (Adriamycin is the drug commonly used as a part of chemotherapy). Another interesting fact regarding its healing power is that Soursop selectively targets only the harmful cancer cells, while it leaves behind healthy cells of the body untouched. Thus, unlike chemotherapy, which indiscriminately kills all cells (especially the superficial ones, like hair cells) in the affected region, Soursop does not harm the healthy cells. It also spares the person in question of the side effects of chemotherapy like severe nausea, hair loss, weight loss, and deforming skin changes. 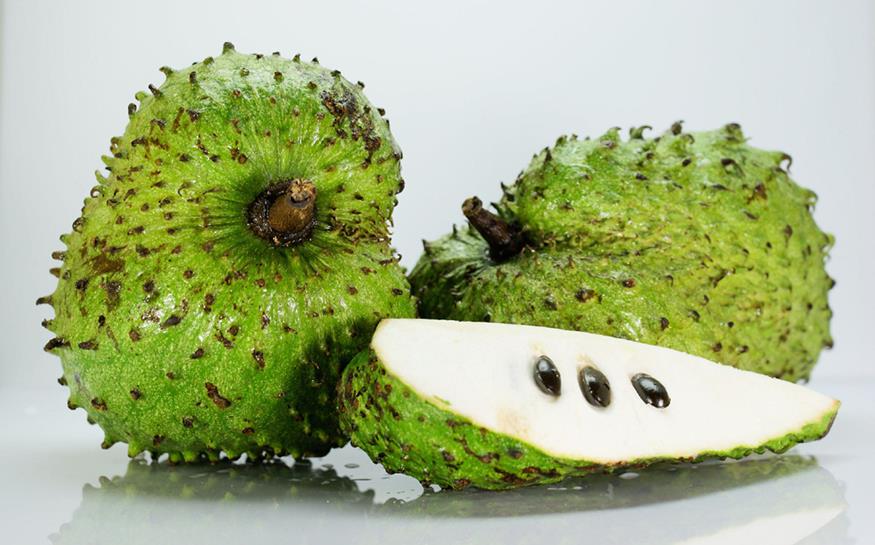 Some studies even claim that Soursop can target and help in the treatment of nearly twelve different types of cancers including colon, breast, lung, prostate, and pancreatic cancer; the extracts of Soursop are also known to kill certain cancer cells of the liver which can’t be destroyed through chemotherapy. It is also claimed that during the course of chemotherapy, Soursop manages to protect the immune system by preventing it from getting harmed by the effects of chemotherapy. There are experts who question the effectiveness of using Soursop in cancer treatment. In-depth research on the subject can thus, help us understand more about benefits Soursop.
Soursop Leaves Research
In the early 1990’s a medicinal herb was found among the tribes of the Amazon that can cure some serious diseases, including cancer. After an investigation by the pharmaceutical experts from the United States, the benefits apparently derived from the leaves of the Soursop tree. The leaves contain substances known as Annonaceous acetogenins against cancer, which can kill cancer cells without harming healthy cells in the human body.
The pharmaceutical industry is trying to patent the results, but it failed because of the pure active ingredients extracted from plants in nature, which means public property. Sources have stated that Soursop leaves are 10,000 times more effective than chemotherapy. This is related to cancer treatment. Understanding chemotherapy itself is the use
of chemicals to slow the spread or even kill cancer cells. Apparently, according to researchers at the Cancer Chemoprevention Research Center University of GadjahMada (UGM CCRC) Indonesia, Nur Qumara Fitriyah, McLaughlin’s research shows a small dose of Soursop leaf effectively suppresses cancer cells.
McLaughlin’s research is based on crude extracts of leaves of the Soursop ED50 <20 ug / ml, whereas the only pure compounds ED50 <4 ug / ml. This means that a dose ordecoction of 10-15 Soursop leaves is still safe to eat. The Journal of Natural Products publicized results from AgrEvo Research Center in North Carolina, United States that the Soursop leaves contain the ability to kill colon cancer cells with 10,000 times the potency found in Adriamycin and chemotherapy.
When the experts from the Health Science Research Institute realized the miracle related news of Soursop, they began to do research. The results were startling. Soursop tree proved to be an effective cancer cell killer. The National Cancer Institute began the first scientific research in 1976. Results proved that Soursop leaf and stem wood are able to attack and destroy the cancer cells.
Another study published by The Journal of Natural Products published that studies conducted by the Catholic University in South Korea, mentioning that one of the chemical elements contained in Soursop, able to determine the difference between healthy and contaminated cells. Thereby, targeting and killing only cancer cells and leaving healthy cells free of disruption. Unlike chemotherapy, which cannot distinguish between cancer cells and healthy cells—harming all it encounters. Purdue University also conducted a similar study showing that the Soursop leaves are able to kill cancer cells effectively, particularly prostate, pancreas, and lungs cancer cells.
Health benefits are provided by the following preparations: